Click here to see how Calia is adapting to the COVID-19 situation.

Due to the covid‑19 situation, in-person sessions are suspended until the situation improves.*

While waiting for the reactivation of the in-person sessions, you can see the complete list of sanitary measures.

If you subscribe to Alie's Email, you will receive an email as soon as I know when booking will be activated. Otherwise, you can follow Calia on Facebook.

*Calia reserves the right to modify these sanitary measures or to suspend in-person services at any time depending on the epidemiological situation.

How to make sure you light the right FIRES!

10 ways to increase your happiness hormones even without cuddles.

5 steps DIY for a self-cuddling session that you can do at home.

See what are the services offered and which one would better suit your needs, capacities and boundaries.

Thanks to sanitary measures; learn self-care, one consenting cuddle at a time.

To have a chance to connect more authentically, virtually.

Thanks to the hug protector, Alie can finally safely hug you tight!

In order to allow the resumption of in-person services, Calia has put in place several sanitary measures in order to limit the spread of COVID-19.

Consult the code of conduct to which you will have to commit and make sure that it corresponds well to your expectations.

See how we can make sure everyone is actually willing and having a great time, at every moment.

For more information on the terms and conditions of the services, consult the Service Contracts that you'll have to sign once you're here.

…making sure you light the right FIRES!

Otherwise, it isn’t fun for anyone! 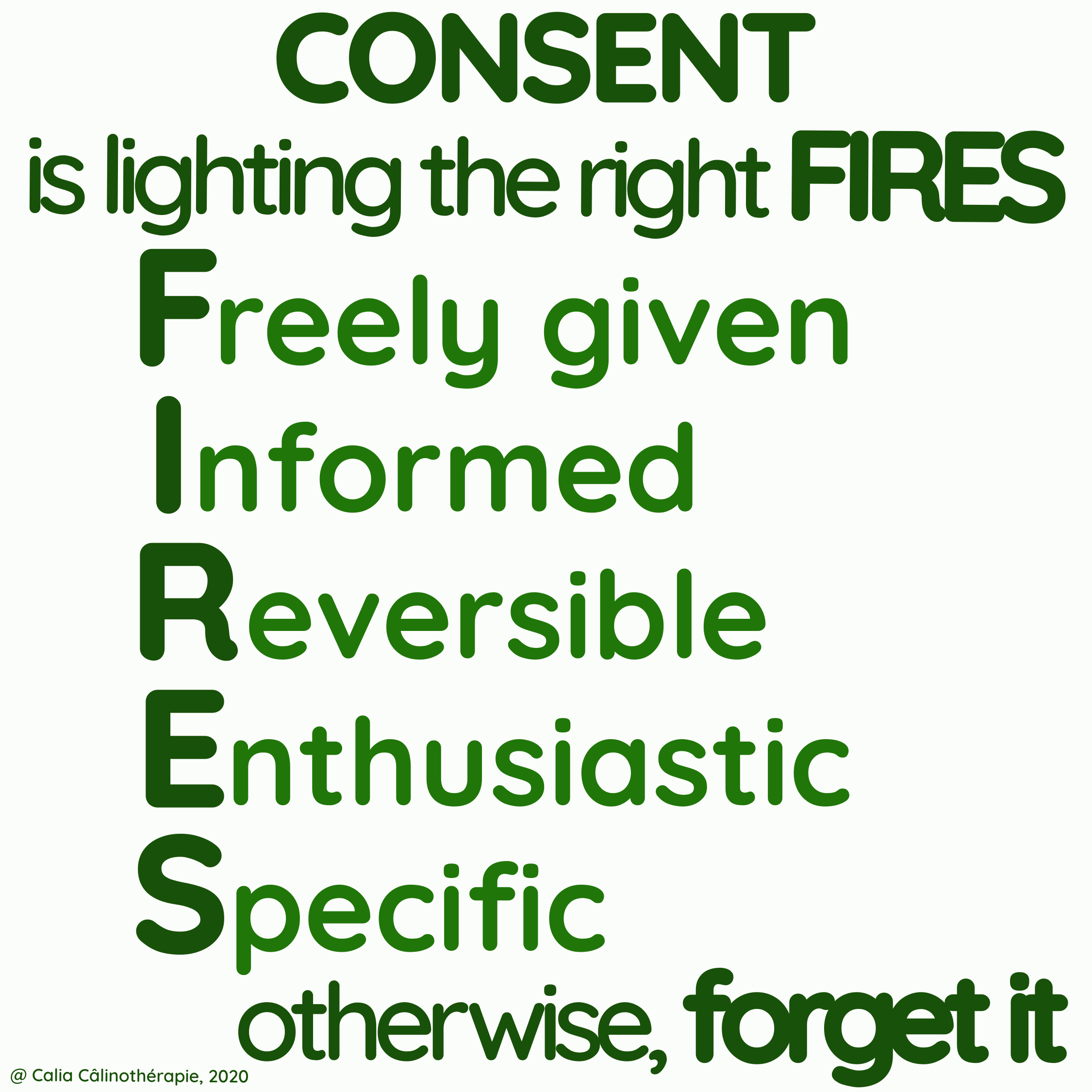 Consent, what’s that?
Definition of consent and the situations in which you need it

Why talking about the right FIRES?
The issue with previous campaigns

Consent, lighting the right FIRES, how does that work?
How to use the acronym FIRES to get valid consent

CONSENT …making sure you light the right FIRES!
The acronym FIRES as such and the explanation of each criteria

Making sure that everyone involved is, at all times, perfectly comfortable with what is happening.
Consent is therefore the key to a comfortable interaction for everyone! 😍

Valid consent is needed in any situation involving more than one person and where there could be any physical or psychological discomfort (discomfort, embarrassment, fear, anger, anxiety, etc.); Whether it’s a hug, sex, physical contact, the topic of conversation, information sharing or even a simple presence!

Why talking about the right FIRES?

Previous campaigns “No, means NO” and “Without a YES, it’s NO” made people realize that a NO and even the absence of a YES must be taken seriously and should result in the immediate cessation of the interaction. Unfortunately, these campaigns take for granted that if the person says YES then they are officially and completely consenting, but
“Even a YES can be a NO”.
Indeed, many people say YES when they would have preferred to say NO. Others, because they said YES at the beginning, keep saying YES even when they don’t want to continue. Therefore, it takes more than a YES to consider a person consenting; it takes a real YES, with the right kind of FIRES!

The acronym FIRES, what is it?

“FIRES” is an acronym that I borrowed and modified from the Planned Parenthood Federation of America‘s “Consent is easy as FRIES”. (Although, I still created the french version myself: RÉELS!) The acronym encompasses the 5 criteria for valid consent. The order in which the criteria are presented is not important (except to form a word that makes sense!). The idea is to help making sure that each interaction meets the 5 FIRES criteria! 👍

Hey, plus the acronym FIRES works in every way! 😮

Check this next section!

Consent, lighting the right FIRES, how does that work?

If someone asks you a question

If you ask someone a question

…making sure you light the right FIRES!

Otherwise, it isn’t fun for anyone!

Click on each of the criteria for more explanations.

Yes, I know, not everyone is able or wants to give themselves the “trouble” to check all these criteria before proposing or agreeing to do something (although with practice, it becomes easier and easier, I promise!). But, at a minimum, we should be aware of the criteria that are or aren’t met.

When you realize that one of the criteria is not met, whether you mention it or not, whether you stop the interaction or not, at least you can understand where the error is. You can better understand why “all of a sudden” the atmosphere becomes uneasy or why afterward you regret having done it. Besides, next time, it will help you do better, react faster, or communicate better, and the interaction will then be much more pleasant for everyone. The best way not to redo your mistakes is to understand them!

Cuddle Therapy, to help you

If you want to help Calia raise awareness and spread the word about consent, visit Calia’s Consent Shop and buy your “KEEP CALM AND ASK BEFORE TOUCHING” T-Shirt (several models available).

At Calia, Cuddle Therapy
consists of a safe, caring
and non-judgmental space
where you can be yourself; share
your stories and emotions;
learn what consent
around touch really is and
think about its implication in
your lives and relationships. 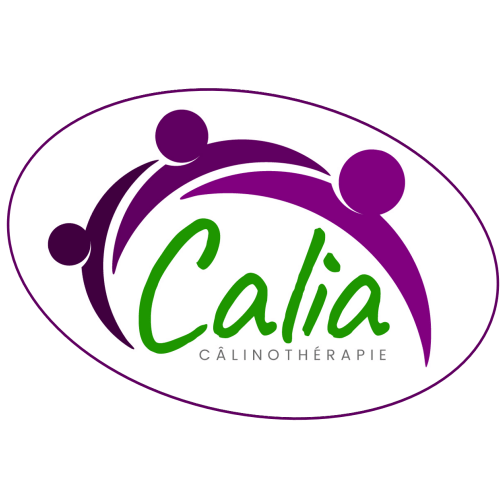 Learn self-care
one consenting cuddle at a time

Monday through Sunday
From 9am to 9pm